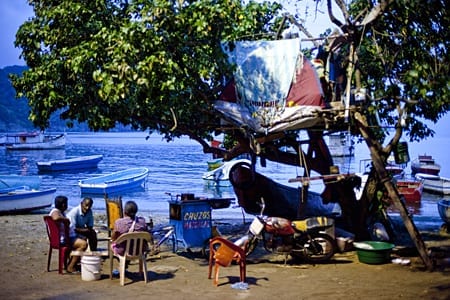 While in Santa Marta, on Colombia’s eastern Caribbean coast, a old beggar in front of a supermarket told me he was a fisherman in a small neighboring village called Taganga. He explained that fishing was worse these days.  The last few days he caught enough to eat, but was there begging to buy potatoes he could prepare with the fish.
I had arrived to Santa Marta on a bus that follows the main northern road that cuts through the Ciénaga Grande de Santa Marta Boisphere Reserve, Colombia’s largest coastal lagoon.  An endless labyrinth of swamps, marshes, mangroves and channels that is home to three fishing villages built on stilts.  In the last decades the fishermen can give first hand testimony of the extent of decay and contamination in the area, mostly because that very coastal road  has become a wall that interrupts the natural mix of salt and river waters and because the Magdalena river that feeds it picks the sewers and toxic fluids from the whole country.  Fishing is down to a tenth of what used to be and the roadside villages that serve as fish markets, deafened by the roar of passing trucks and buses, with their mountains of trash and plastic in all possible forms, with its foamy waters depict a scene from the Apocalypse, freeze your blood.  I had a chance to see it quite well: before arriving to Santa Marta I had waited in vain for hours to hop on a fisherman’s canoe heading back to the middle of the swamp, to Nueva Venecia [New Venice].  I so wanted to spend a day or two there, get a feel for what an amphibian life is like.

Two days after buying potatoes for the old fisherman I myself was in Taganga.  In recent years young foreign backpackers and scuba divers have turned the little village into a popular spot, have put it on the map and on tourist guides.  I might not be young any more, but I do fall in the other three categories: foreign, backpacker and diver.  Things on the bay are nonetheless not that different from before the tourist “boom”: locals still go out fishing every day, save some of the catch and sell the rest to buy basic things.  All life happens on and around the beach.  Some people live right there, on the sand, on a tree tent on empty boats that at dusk look like sarcophagi, everyone buys their fish there and fish is eaten every day.  They hang out, swim,

simply sit and stare at the water and do people watching, that past time we primates so love.  Brazilians say that beaches are democratic, with everyone sharing the same space half naked, and Taganga beach is as democratic a beach as I ever saw.

In the half hour I walked up back forth the small bay five boats came to the shore.  All the fish got counted, measured and weighed by government inspectors that happened to be there for the day and was immediately sold. A man stood out from the rest of the crowd that congregated upon every arrival.  This man went from boat to boat, took the fish to the buyers and restaurants, scaled them, gutted them, moved, all fibrous and well proportioned, like a tanned Nijinsky playing the role of a gypsy matador. He even adopted some of the poses of bullfighters while dancing on the sand. Miguel, that is his name, is always barefoot, only wears bathing shorts and a plastic rosary.  On his left hand he was holding two fish someone had given him and on the right had a knife to swiftly do his job upon request.  Fascinated, I asked him if I could take a couple portraits and he proudly began to talk.  He said he lives with his woman, a few blocks up, but that they had quarreled in the morning and instead of sleeping with his Viviana he was going to stay right there for the night, in his old boat, once named Viviana too, but where only the first four letters can still be read.
“Vivi”:  “I lived”. I admired his plastic rosary.
“I never take it off.
I like it because it is white and I am not.  And it shines at night”, he replied.