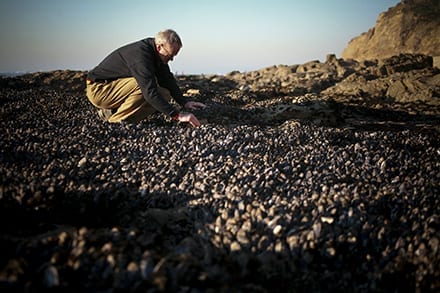 Thoughts on our oceans from Málaga, Spain

Back in the early 80s, when I was a kid, I loved going to the harbor in my hometown to watch locals fishing from the pier.  The most fascinating technique was how cuttle fish was caught.  Fishermen would have a live female in a bucket, carefully tie it up with a fishing line and throw it in the water.  The female would swim around or be pulled along the pier until it caught the eye of a male.  Irresistibly, the male would approach it, face it and begin to change colors rapidly.  A moment later they would embrace with their tentacles in sort of a kiss (the male’s reproductive organ is in one of them).  Once that happened the fisherman could easily pull them both out because they do not let go of each other.  Water was surprisingly clear and you could follow the whole involuntary hunting scene from the rocks. I thought it was such an ingenious method of fishing, it showed great ingenuity and knowledge of nature, but in my mind it also felt like a particularly twisted way of fishing, somehow more of a betrayal than a hook with bait and it kind of made me sad.

There was something eerie about the harbor, disconcerting: pollution was not visible, but it was obvious not everyone could live there.  One could clearly tell who the winners in that altered environment were and the impact such waters have on biodiversity.  The rocks were covered with black sea urchins and one type of orange starfish, but there were almost no mollusks and the only fish that seemed to be in abundance were leaping mullets, which are called “lisas” in Spanish.  People in Spain say lisas will eat anything, even plastic, and for that reason up to this date I never tasted one.

Whether we like it or not, adaptation is going to play an important role for life in the oceans of the future.  I am no scientist, but have no doubt certain species would be just fine, even thrive in extremely acidic waters.  Then we have the ones that could adapt if the process of acidification was not so speedy, as it happened in other eras of our planet, when it was not induced by man.  But even then many creatures disappeared.

I read yesterday a report on physorg.com that brings a dim light of hope to the future of coral reefs.  It seems that the study of fossil corals is showing some species have proven in the past to be sturdier than expected, capable of adapting to massive environmental changes.  Unfortunately, the same article points out that “the combination of drastic environmental changes that we’re seeing today, such as degraded water quality, depleted fish stocks, coral bleaching, ocean acidification and loss of habitat are unprecedented in the history of coral reefs”.
http://www.physorg.com/news186604510.html

The source of our clash with nature is in my opinion this:  we need to begin seeing the world and the role we play in it in a radically different way.  We have to first question and then do away with our absurd sense of entitlement to alter and use nature as we see fit.  We need to start thinking that just because we can do it does not mean we should do and even less that we are entitled to do certain things.  If we fail to learn this lesson, our descendants will be blinded by the same lights we are, confusing technological advances and scientific discoveries with true progress.

Let’s fantasize: let’s imagine that the life we are so eager to find in other planets is finally discovered around, for example, the frozen waters on Mars.  Man surely decides to send a mission to bring samples back home.  Of course.  We all know the utmost care would be placed on not contaminating that environment or altering it in any way at the time when astronauts landed on the Martian poles.  It would take years to prepare for this mission and steps would be thought over and over with great excitement and anticipation.  Still, right here we have alien life, diversity we are only now beginning to understand as it vanishes forever, millions of species that live under different rules, that do not even need oxygen or light for their survival, that grow in the most insane shapes, colors, sizes and coexist in ways we had not even imagined, a true and real wonder that starts where the sand and rocks end, and yet, what do we do?
If only two or three of the microscopic algae in the oceans were found in Mars they would be the news of the millennium and still, see what we are doing right here?  It’s madness.

Sven looking for alien life on the California coast Found in a puddle