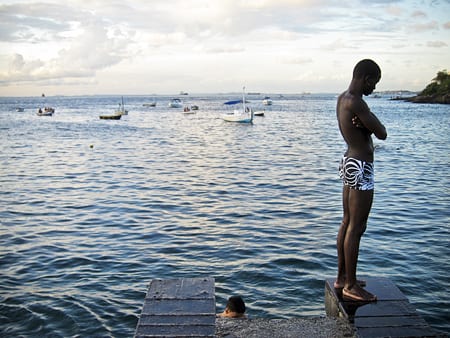 After the film festival in Iraquara and a few days in Salvador I have kept making my way up north along the Brazilian coastline. The days in Salvador were intense and full. That city feels deeply African. The beautiful and graceful black people, the descendants of the slaves brought by the millions by the Portuguese are but one reason. It is the latitude, the Atlantic air, the food smells of dende oil and spices, capoeira, forro dances and music, the traditional colorful clothes and turbans street food vendors wear, the rough local markets with all possible assortments of candomblé charms and necklaces. Even the way people walk and the ever-present laid-back attitude reminded me of Africa. But not all is exuberant and photogenic, that is not the picture I would like to paint. Everywhere you look there is also gut-ripping poverty, an unfairness even less tolerable when compared with the wealth inside this massive country, when placed beside the luxury the fortunate ones display, when one sees the abysmal gap between those that have and those that do not. At least, one can say that it is frank, up front: the well fed share the same streets and live almost in the same places as the destitute, so one can come up with excuses and justifications for the massive disparity, nobody can claim to live in oblivion. The tipping point for me, what breaks my heart, is probably the street kids and the widespread prostitution. In Salvador I did not manage to get any screenings, but had a promising meeting that might lead to something in June at a film festival.

Joao Pessoa hosted two very different screenings. One was at the Universidad Federal de Campina Grande for the biology students, the second one at the Estação Ciência, Cultura E Arte, in a brand new superb complex designed by the man with the retro-futuristic trademark, architect Oscar Niemeyer (he must be around 103 by now). The Q&A-turned-debate after the screening was very interesting. Some of the male students were very eager to focus on the responsibility the US has in the current worldwide economic and environmental situation and the doomed future of a society that believes in this impossible to sustain capitalistic pattern of endless growth. Such rejection and finger pointing to the US is shared in ample parts of the world (I do not know how aware US citizens are of their low popularity abroad) but I believe it is somewhat simplistic, self redeeming and naive. I tried to redirect the talk to pteropods, CO2 levels and the smalls steps that will pave the way to a better world with bearable acidity in the oceans, but the talk went again and again in the direction of a radical revolution. Maybe this blog should not turn so confessional, but I went through all sorts of feelings about aging, maturity and where truth lies. I agree there are so many wrong things in the civilization we have created that it might seem tempting to want to break away from everything and start it all again, but I feel too aware that whenever that approach has been taken the results were such flaws, steps back rather than forward. I am now getting closer to my 40s and becoming a firm believer that the small steps are the ones that pave the way towards improvements and a new more successful paradigm for the world, which kind of pisses me off, because at the same time I have to admit I felt like I was cleaner and closer to the truth when I was 22 and utopia tasted so much better than compromise.
During the second screening I met the owner of a diving school and thought it would be great to try to distribute dvds and do small screenings at such locations. Nobody can feel what is at stake more than a diver that has had the privilege to swim around coral reefs in tropical waters.

Joao Pessoa was kind of misleading. It is a tourist destination for Brazilians and at times I thought it was more bland and less unique, cleaner than the average northern town, safer as well, but unexciting. Still, I did get to continue the search for tropical fruits, had the chance to taste a dish called “snake’s armpit”, walked out of a bar after waiting for an hour and a half for a vegetarian sandwich and saw vast portions of “mata atlántica” forests or semijungles in the middle of town.