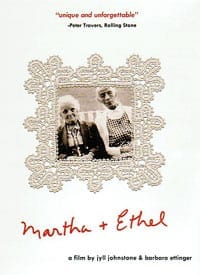 Also from the Director of A Sea Change “One of the most revealing, eloquent and well-received films at the Sundance
film festival… ambitious and emotionally deep. An affectionate portrait.”
— New York Times

In affectionately telling the personal stories of their nannies, filmmakers Jyll Johnstone and Barbara Ettinger have gone right to the heart of exploring the true meaning of family. As Ethel, the nanny from a black sharecropper family in South Carolina who cared for the six Ettinger children, states so movingly, “You don’t have to birth a child to love it”. Another perspective is provided by one of Martha’s five Johnstone wards who asks in a confused voice, “Should I love my own mother more?”

Through interviews and recollections, photographs and home movies, songs and archival footage, this engaging documentary paints a portrait of dynamic family relationships set against the backdrop of changing American attitudes toward parenting styles, the role of women in society, race and class.

Although both well-to-do families lived in New York during the post-war baby boom years and adhered to the common practice among the affluent of hiring help, each chose a very different woman for the job. Martha, a German immigrant trained as a baby nurse, stressed cleanliness and discipline. Ethel, on the other hand, was a natural who lavished affection and listened carefully to the needs of the brood she raised.

The film is beautifully structured, using headings to introduce us alternately to each nanny and her respective family. The contrasts provide a non-judgmental framework, allowing us to make up our own minds about the childrearing choices made and the impact they had on individual lives.

Touching, intelligent and well-crafted, Martha and Ethel allows us temporarily to become part of these two families — and in doing so, to reflect upon our own experiences and beliefs.

“One of the most revealing, eloquent and well-received films at the Sundance film festival… ambitious and emotionally deep. An affectionate portrait.”
— New York Times

“The movie is touching, honest and revelatory.”
— Washington Post

“Highly personal and original, Martha & Ethel deals with a subject rarely seen onscreen before: nannies and their long-lasting influence on the children they raise. Criss-crossing the paths of the filmmakers’ own nannies, a German-Catholic and a Southern black woman, this remarkable docu provides a piercing yet subtle look at the inner workings of two families as they change over five decades of American history and politics.
— Variety