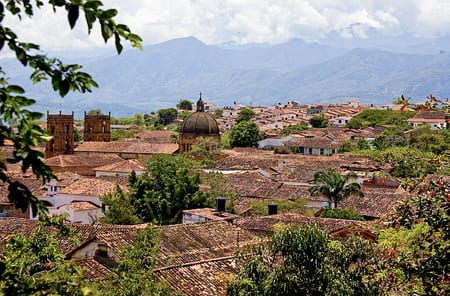 After almost half a century of fear, murder, blackmailing and threats the “Basque separatist group” ETA, as the New York Times offensively always chose to refer to them, the terrorists responsible for the death of many hundreds of children, housewives, politicians, policemen, military men and college professors has been forced to put an end to its activities.  No remorse, obviously, no asking for forgiveness, but I feel elated all the same and simply had to write about this victory of democracy, of the people.  Anyway, what I was planning to tell you about today was the second festival we were recently part of in Colombia.

FESTIVER is an environmental film festival born this year in the small town of Barichara, province of Santander, 8 hours by car north of Bogotá.  A brand new film festival in a South American country not particularly known for its audiovisual work, organized in a small town hours away from any major city… let’s politely say that I was ready for whatever had to come, my expectations level bottom low. But I was SO wrong: the festival proved once more that the power of achievement of committed, hardworking people knows no limits.  Festiver is the baby of Toto Vega and Norida Rodríguez, two famous actors (as I found out while in the country) who live and work in Bogotá, but adore the picture perfect town of Barichara, its unbeatable climate and the gorgeous surrounding area.  So they decided to create this festival to keep them busy whenever they decide to retire from the big city.  They hired the most enthusiastic and attentive team and developed a carefully thought out plan and infrastructure to do the screenings, prepare cocktail parties and social events, to impart interesting workshops on film making and film production, to even take the movies to the tiny nearby hamlets so some locals could see a movie on a screen for the first time in their lives.  How cool is that?  We, the international participants, were treated like royalty, stayed at a beautiful small hotel in the heart of town, feasted every lunch and dinner on local specialties like fat bottomed ants were entertained with local folk dances for our eyes only, went on field trips, found chocolate boxes, guava jelly candy, hand crafted straw purses and all sorts of goodies on our freshly made beds every afternoon…  I have to stop writing or there is going to be a war at Niijii Films to represent the film at future international festivals.  We also did some cool and sensible activities, like the planting of trees to offset our carbon footprint during the festival (see picture below, the soil was so hard you had to stab it).  Perfectly thought out and done. The feature length and international documentaries were screened in an open air venue at the highest point in town.  Every evening, right after dusk, we all walked on the empty stone paved streets, armed with pillows, blankets and some wine to our “evening of wonderful, disturbing films”, as someone described it. The way it looked during the day, with Spanish producer Loris Omedes to deliver a sense of scale

Attendance was astoundingly high and nobody left, they all stayed until the very end and cheered.  We, the “international participants” all did small introductions at the beginnings and had the usual after-screening Q&As common around the globe.  There were films from the USA (us), Spain, Argentina, Mexico, Germany, Colombia and France.

In the mornings we either attended the workshops, had interviews with the journalists that had come to cover the event (CHECK THIS LINK OUT, for example) or strolled around the Eco-friendly market on the town square, right in front of the Barichara cathedral.

180 degrees of cathedral for your pleasure, by photographer Daniel Conde

All terribly stressful, but some insist on not calling it work.